Foreign direct investment (FDI) increased by RM4.6bil to record a higher inflow of RM12.8bil in the third quarter this year, mostly in the form of equity and investment fund shares.

The Statistics Department said on Friday manufacturing remains as the main sector for foreign investment in Malaysia, followed by financial and wholesale & retail trade.

Chief Statistician Datuk Seri Dr Mohd Uzir Mahidin said the main FDI sources were from Singapore, the Netherlands and the US.

In the meantime, direct investment abroad (DIA) switched to net inflow of RM4.7bil from a net outflow of RM4bil in the previous quarter due to capital reduction and loans received from abroad.

He said the major sectors which contributed to the inflows were financial and mining. The top three DIA inflows were from Mauritius, Switzerland and Austria.

Commenting on the accumulated investment, he said: “As at the end of 3Q of 2021, FDI position improved by RM39.3bil to register RM769.6bil, while DIA position was RM543.9bil. Malaysia’s International Investment Position (IIP) continued to record a net asset of RM68.1bil.

“The Malaysia’s international reserves increased to RM482.5bil from RM461.5bil as at end of the previous quarter.” 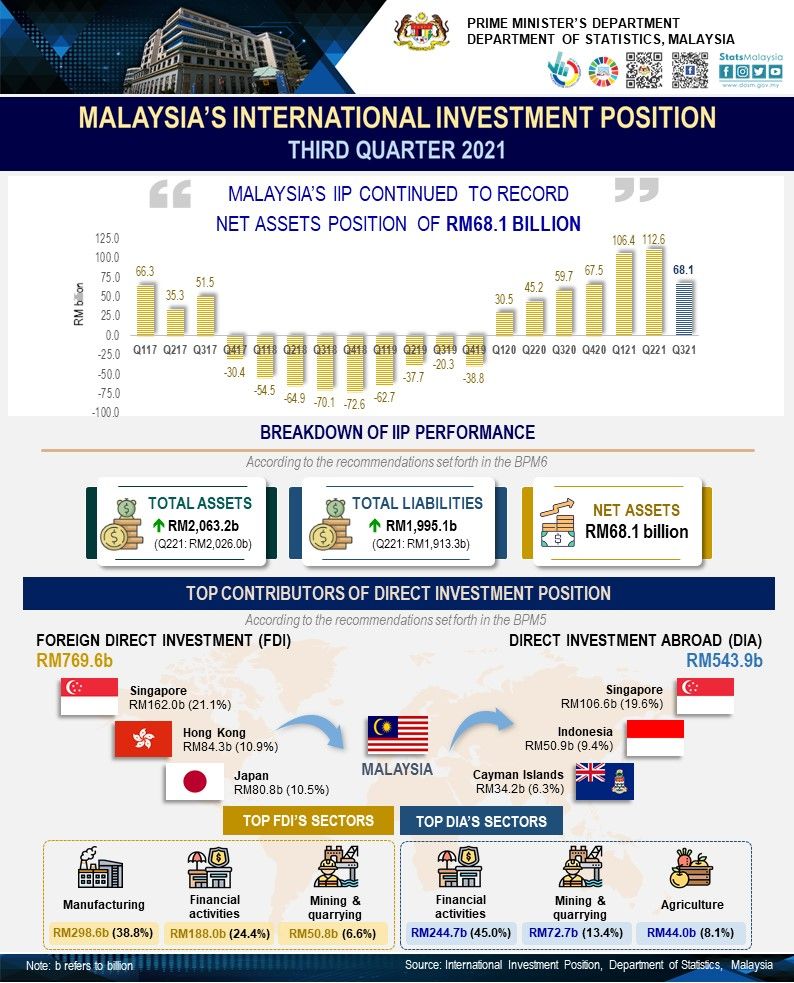 On Malaysia’s current account balance (CAB), he said it recorded a surplus of RM11.6bil in the 3Q 2021, compared to RM14.4bil in the previous quarter.

The details were in the balance of payments and international investment position statistics for 3Q 2021 which presents Malaysia’s cross-border transactions with the rest of the world.

Mohd Uzir said: “Malaysia’s current account surplus was still largely buoyed by the higher net exports in Goods account with RM41.2bil as against RM40.7bil in the previous quarter.

“When compared with 2Q, 2021, the export of goods decreased at a slower rate than the imports that eventually contributed to higher net exports in this quarter. Exports declined 3.1% quarter-on-quarter to RM236.6bil, mainly in electrical & electronics (E&E), chemicals and petroleum based products; largely to China, Singapore and the US.

Similarly, imports of goods also fell by 3.9% quarter-on-quarter to register RM195.4bil as against the preceding quarter. It was observed a downward trend in the imports of intermediate, capital and consumption goods mainly from China and Japan.

Mohd Uzir said Hhowever, the narrowing current account surplus in this quarter was led by the higher deficit in the income accounts.

The primary income account recorded a higher deficit of RM11.3bil as against RM9.5bil in 2Q2021. This was mainly attributed by foreign companies in Malaysia earning higher income of RM26.3bil, an increase of 3.3% from the preceding quarter, particularly in direct investment.

He explained these companies were primarily involved in the manufacturing and financial sectors where the income was mostly channelled to Singapore, the Netherlands and the US.

Meanwhile, Malaysian companies abroad earned a lower income of RM18bil as compared to RM19.3bil in the previous quarter, especially in other investment.

Most of these companies were located in Indonesia, the US and Singapore, principally engaged in financial and mining sectors. 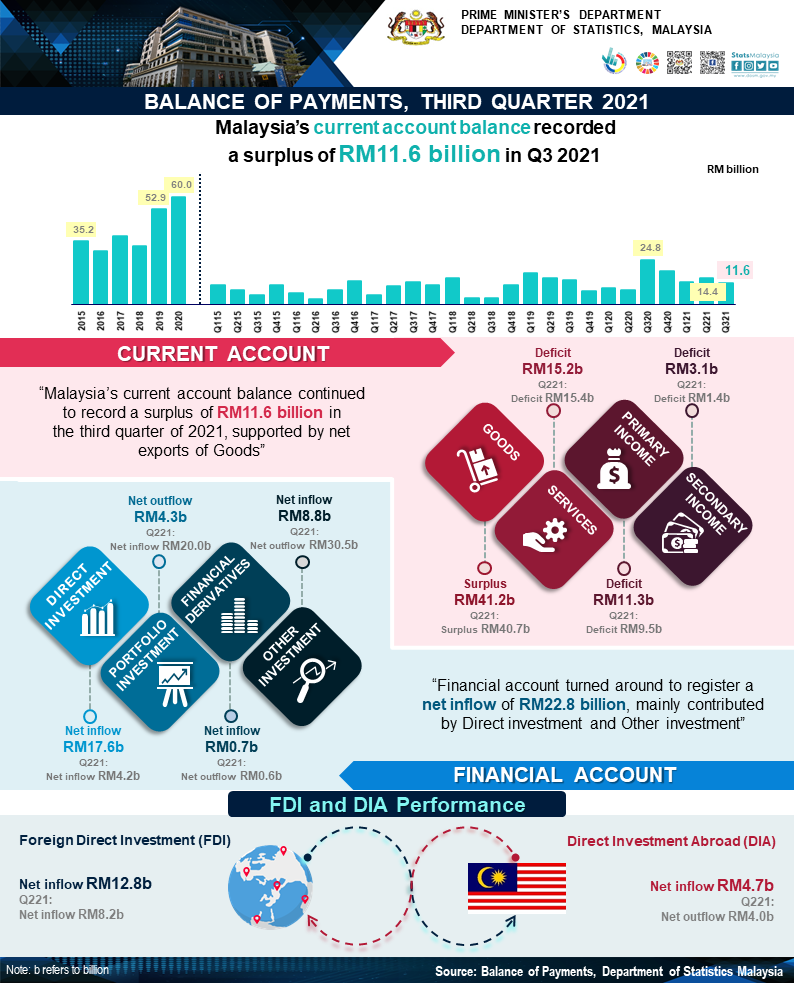