The journey of Malaysia shifting from fossil fuels to renewable energy sources provides significant challenges and opportunities for various energy sectors. Malaysia as a signatory of the Paris Climate Agreement in 2015 is committed to reducing greenhouse gas (GHG) emissions by 45 per cent by 2030. In efforts to uphold this commitment, the Government has undertaken various initiatives to address the impact of climate change by exploring energy alternatives to substitute fossil fuels. Among them, hydrogen is considered the most promising alternative energy carrier in the world today. Presently, the majority of hydrogen is used for heavy industries such as oil refinery processes and the manufacturing of methanol, ammonia as well as iron and steel.

According to the Hydrogen Council, a global CEO-led initiative to accelerate the energy transition through hydrogen, there are multiple ways to produce hydrogen and it can be categorised using colours based on the sources and processes by which hydrogen is produced. Details as per Table 1.

Table 1: Details on the types of hydrogen 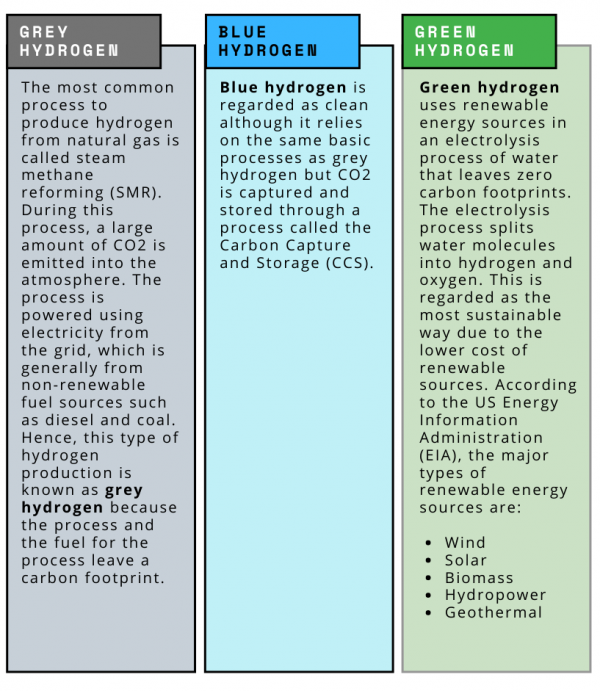 Global hydrogen is forecasted to achieve production that is more than doubled by 2030 and quadrupled by 2050. If grey hydrogen remains the main source of hydrogen, the CO2 emissions from hydrogen production will double in the next decade. This is contrary to the pledges for carbon emission reduction made under the Paris Climate Agreement to keep global warming well below 3.6 degrees Fahrenheit (2 degrees Celsius) by 2030. Thus, green or clean hydrogen plays a pivotal role in addressing the growing need for hydrogen in a more environmentally cleaner and sustainable way.

According to the Hydrogen Insights 2021 Report, there are 228 large-scale hydrogen projects announced globally and 17 of these projects are on a massive scale production, with the biggest in Europe, Australia, Chile and the Middle East. The current momentum for hydrogen as a key energy transition pillar is fueled by the increasing awareness of the importance of clean hydrogen as well as the impact of the COVID-19 pandemic. These projects cover the entire hydrogen value chain ranging from hydrogen production, large-scale industrial uses such as refinery processes, industry feedstock to transportation applications, infrastructure projects and integrated hydrogen economy that often feature cross-industry initiatives in strengthening the countries priorities and goals.

The Republic of Korea and Japan are leading the way among Asian countries when it involves green hydrogen investments. Both countries, especially the commercial giants within their countries, such as Toyota and Hyundai are pioneering hydrogen cell technology collectively towards a future of clean transportation. Meanwhile, China plans to put in place 300 hydrogen refuelling stations by 2025 and targets to reach 1,000
by 2030. This infrastructure will support 50,000 fuel cell electric vehicles (FCEV) by 2025, expanding to a million by 2030.

It is expected global hydrogen demand will be reaching close to 530 million tons in 2050 from 21 million tons recorded in 1980. This equates to around 7 per cent of global energy consumption (Strategy&, PWC). The transportation sector is expected to become the largest consumer of hydrogen contributing 28.2 per cent to the global hydrogen demand. Within the transport sector, hydrogen-powered forklifts have a higher demand proportion compared to other transport modes, followed by hydrogen-powered passenger cars, where demand is expected to increase to 36 percent. Countries need to pay attention to the development of hydrogen supply chains (HSC) which are crucial to determine whether a hydrogen based-economy is reliable and can provide a sustainable energy supply. These factors are key to entice investments, particularly for energy intensive industries to become more sustainable in their operations such as the oil and gas or steel-based industry. The HSC involves multiple echelons (from the selection of energy source, production, storage, transportation, and distribution, which interacts along the chain up to end application).

As a signatory to the Paris Agreement, Malaysia envisions the Hydrogen Economy not as a total replacement of fossil-based fuels for energy generation but one that develops and promotes hydrogen technologies and fuel cells as important primary fuels to contribute to the required GHG emissions reduction that the country aspires to achieve in line with the Sustainable Development Goals (SDG).

In regions where low-cost renewable electricity can be generated on a large scale, such as in Sarawak, there is an immense opportunity for exporting hydrogen. However, there are challenges that need to be addressed. Embarking into clean hydrogen within the primary energy sector requires a deal of complexity in its relevancy production, transportation, and end-use. Furthermore, there is a negative perception of biomass as a renewable source to produce clean hydrogen. It has been debated that biomass gasification, while considered a renewable source, it is not considered a green or clean source as the process also emits CO2 emissions.

Despite the challenges, hydrogen remains an attractive prospect as a sixth fuel and an alternative source of energy. This is driven by the depletion of fossil fuel and subsidy rationalisation on the current power generation scheme. The right formulation of policy and development of the hydrogen infrastructure, cross industries ecosystem and talent are required to overcome the current challenges. A carbon-to-hydrogen fund needs to be established, contributed by carbon-emitting organisations and be used for the promotion, development, and commercialisation of hydrogen fuel production, storage, transport, logistics and delivery to end-users. In addition, more focused R&D&C efforts need to be undertaken by research institutions, universities, and industry players to speed up the transition from the research stage to the infrastructure development and on to the scale-up stage in the industry.

The Ministry of Environment and Water is in the midst of preparing a Low Carbon Mobility Blueprint which includes a long term strategy to ensure the successful adoption of Hydrogen energy. The Government’s aspirations for this have also been reflected in the green initiatives under Budget 2021.

It is imperative for the Government to act strategically. A conceptual framework with a three-phase plan has been proposed to accomplish a hydrogen economy for the Malaysian market:

Phase 1: Green/blue hydrogen to be utilised as feedstock for the chemical industry

Phase 2: Once hydrogen production is at a mature level in the second phase, hydrogen should be used as fuel in internal combustion engines or burners

Phase3: Hydrogen to be used as fuel for automobiles (using fuel cell), fuel-cell combined heat and power (CHP) and as energy storage

As the principal investment promotion agency of the country, MIDA has been actively engaging with the relevant stakeholders such as GLCs, state promotion agencies and Think Tanks to attract and facilitate clean hydrogen projects. MIDA has also been involved in assisting state governments in the development of hydrogen infrastructure and its supply chain.

As a case in point, Sarawak with its immense renewable energy resources (hydropower and mini hydro) is leading in its green agenda with the launch of its first integrated hydrogen production plant and refuelling station in South East Asia in 2019. The project was undertaken by Sarawak Energy Bhd (SEB) in collaboration with Linde EOX Sdn Bhd to build a facility that includes a plant that produces hydrogen through electrolysis and a refuelling station for the state’s first hydrogen-powered vehicles.

In October 2020, another state owned agency Sarawak Economic Development Corporation’s subsidiary, SEDC Energy Sdn Bhd, inked a tripartite Memorandum of Understanding (MoU) with Japan’s Sumitomo Corporation and ENEOS to build a hydrogen plant in Bintulu. The project, with a capacity of 1,000 tonnes per annum, is expected to be ready by 2023. ENEOS is the brand name for products manufactured and sold by JX Nippon Oil & Energy Corp, Japan’s largest oil company.

Additionally, Petroliam Nasional Berhad (PETRONAS) and SEB signed a MoU on 10 November 2020 in order to strategise a collaboration to explore the commercial production of Green Hydrogen and its supply chain in Asia. This is to meet global clean energy demand and to position Sarawak as a hub for the hydrogen value chain. PETRONAS is looking at hydrogen as a decarbonisation solution by managing carbon dioxide emission across its value chain, and is viewing hydrogen as an enabler for potential business growth.

Moving forward, MIDA continues to form collaborations with strategic partners to attract potential investors and to support the development of the hydrogen economy. Among the key areas of focus are production and supply of clean commercial hydrogen for export, storage facilities and infrastructure, transportation carrier (converting hydrogen into methylcyclohexane (MCH) to enable efficient hydrogen transport) and fuel cell applications (components, material and technologies) for the automotive sector. MIDA encourages investors to explore on the business prospects of this new growth area by approaching our dedicated officers in the Chemical and Advanced Material Division.